From Wikipedia "a 2D side-scrolling platform game developed and published by Nintendo for the Nintendo DS. It was first released in May 2006 in North America and Japan, and in Australia and Europe the following month, and is a part of the New Super Mario Bros. subseries of the Super Mario franchise. Similar to other side-scrolling Mario games, New Super Mario Bros. follows Mario as he fights his way through Bowser's henchmen to rescue Princess Peach. Mario has access to several power-ups that help him complete his quest, including the Super Mushroom, the Fire Flower, and the Starman, each giving him unique abilities. While traveling through eight worlds with a total of 80 levels, Mario must defeat Bowser Jr. and Bowser before finally saving Princess Peach.

New Super Mario Bros was commercially successful and received positive reviews; praise went towards its improvements made to the Mario franchise, while criticism was targeted at its simplicity and similarity to previous games. It has sold over 31 million copies worldwide, and is the best-selling game for the DS, as well as the tenth best-selling game of all time. The game's success led to a line of sequels released for the Wii, Nintendo 3DS, Wii U, and Nintendo Switch." 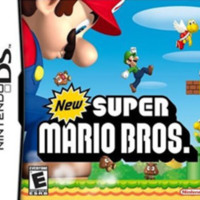