Frome Wikipedia: "2007 adventure platform game for the Nintendo DS and the sequel to 2005's Sonic Rush. It follows Sonic the Hedgehog and Tails, who are teleported to an alternate dimension and seek the help of Blaze the Cat, while battling a band of robot pirates. Gameplay is similar to prior installments in the Sonic the Hedgehog franchise, with players controlling Sonic or Blaze through a series of side-scrolling levels while collecting rings and defeating enemies. Sonic Rush Adventure deviates from prior games with its elements of sea travel, featuring boating minigames that take advantage of the DS's touchscreen.

The game was developed by Dimps, with assistance from Sonic Team. It was programmed using an updated version of the original Sonic Rush's game engine. The game was designed to make greater use of the DS's touchscreen and was inspired by various adventure-themed works. Although the majority of the game is played in 2D, character models and boss fights are rendered in full 3D. Sega released the game worldwide in September 2007 and in Japan in October 2007. Sonic Rush Adventure is also the first Sonic game published by Nintendo, which released the game in South Korea in 2009.

Sonic Rush Adventure received generally positive reviews. Critics highlighted its presentation, particularly the visuals, and music, and some favorably compared the gameplay to that of the original Sega Genesis Sonic titles. Primary criticism was directed at the game's replay value (regarded as weak) and story (regarded as long and boring). Overall, reviewers felt it was a worthy addition to the Sonic franchise and a solid sequel to Sonic Rush, but also believed it innovated too little." 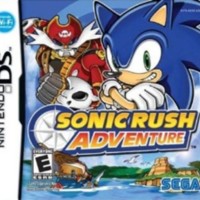