From Wikipedia: "FIFA 10 (FIFA Soccer 10 in North America) is the 17th title in EA Sports' FIFA series of football video games. Developed by EA Canada, it was published by Electronic Arts worldwide under the EA Sports label. It was released on 2 October 2009 in Europe, 1 October in Australasia and 20 October 2009 in North America. It is available for the PlayStation 3, Xbox 360, Microsoft Windows, PlayStation 2 and Wii. Handheld versions of the game were also released for the iOS, Nintendo DS, PlayStation Portable, and mobile phones.

The demo of FIFA 10 appeared on Xbox 360, PlayStation 3, and PC on 10 September in Europe, on 11 September in Australasia, and on 17 September in North America. The playable teams were Chelsea, Barcelona, Juventus, Bayern Munich, Marseille and Chicago Fire. The stadia used in the demo were Wembley Stadium (Xbox 360 version), and FIWC Stadium (PlayStation 3 version). The demo offered friendly matches with half lengths of three real-time minutes. As well as playing a friendly match, the demo allows users to upload created in-game videos and screenshots to EA Football World. The tagline for the game is "How big can soccer get?", and "Let's FIFA 10". Commentary is available in 12 different languages, with each language boasting around 25,000 phrases. The English version features British commentators Martin Tyler and Andy Gray, while Clive Tyldesley and Andy Gray still became as commentators on PC, PS2, Wii and PSP.

FIFA 10 is the second version of the game to sponsor a football club. Along with football magazine FourFourTwo, FIFA 10 is the co-sponsor of English League One club Swindon Town. The FIFA 10 logo appears on the front of the team's away shirt and on the back of the home shirt. It is the first FIFA game to do so since FIFA 07, which sponsored Accrington Stanley for the 2007–08 season" 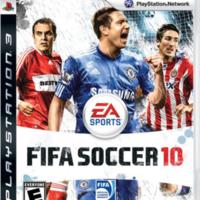