From Wikipedia: "Tetris is a puzzle video game for the Game Boy released in 1989. It is a portable version of Alexey Pajitnov's original Tetris and it was bundled in the North American and European releases of the Game Boy itself. It was the first game compatible with the Game Link Cable, a pack-in accessory that allowed two Game Boys to link together for multiplayer purposes.

The Game Boy version of Tetris plays identically to versions of Tetris released on other platforms. A pseudorandom sequence of "tetrominoes" – shapes composed of four square blocks each – fall down the playing field, which is 10 blocks wide by 18 blocks high in the Game Boy version. The objective of the game is to manipulate these tetrads, by moving each one sideways and rotating it by 90-degree units, with the aim of creating a horizontal line of blocks without gaps. When one or more such lines are created, they disappear, and the blocks above (if any) move down by the number of lines cleared. As in most standard versions of Tetris, blocks do not automatically fall into open gaps when lines are cleared." 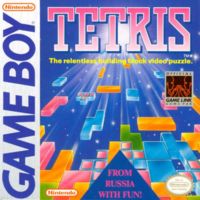